New York Governor Andrew Cuomo was lauded for his honest demeanor and diligent daily briefings when cases of COVID-19 in NY reached record highs. Recently, Cuomo’s honesty has been called into question.

According to an article published by The New York Times, some of Cuomo’s senior aides rewrote a report gathered by state health officials to leave out thousands of deaths that occured in NY nursing homes.

Cuomo’s office eventually released the complete data and Cuomo cited that the reason he had not done so in the first place was “out of concern that the Trump administration might pursue a politically motivated inquiry into the state’s handling of the outbreak in nursing homes.”

The NY governor held a news conference on the situation in which he said, “Who cares [whether deaths occurred in the hospital or in a nursing home]? They died.” 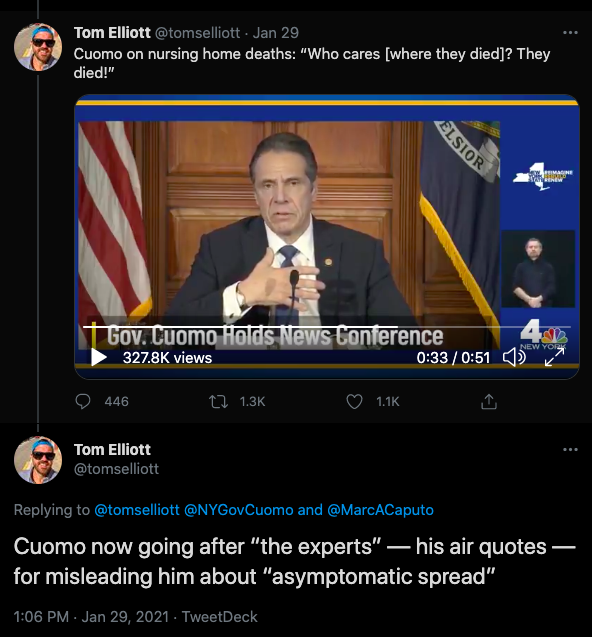 Cuomo also “faces an independent investigation into the harassment allegations,” per an article written about the topic in Newsweek.

According to Newsweek, five women have come forward over the course of several weeks to accuse the NY governor of inappropriate behavior and sexual harassment. Letitia James, NY’s attorney general, is entrusted with leading a probe into these claims.

Cuomo has denied the allegations but members of his own party are still calling for his resignation. 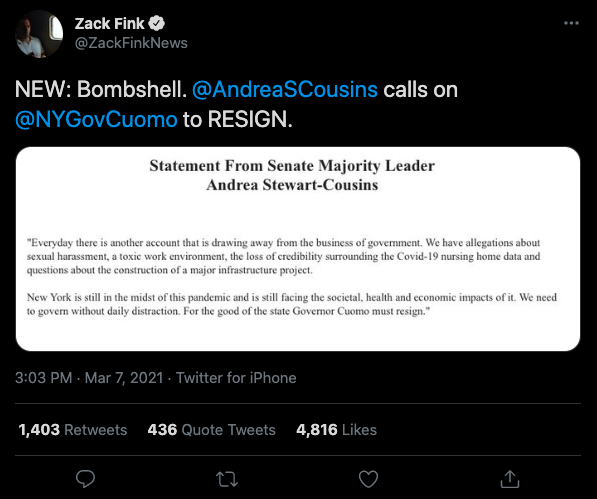 The Guardian reported that Stewart-Cousins, “is poised to vote soon on a proposal mandating that the governor consult with lawmakers prior to issuing emergency orders.”

It is unclear whether the state assembly will act to reign in Cuomo but the governor said he has no plans to resign.

How I wrote the story: This story is an aggregation of multiple different stories, cited with their respective outlets, to create a short summary of news surrounding investigation into Gov. Andrew Cuomo’s conduct with his female associates.